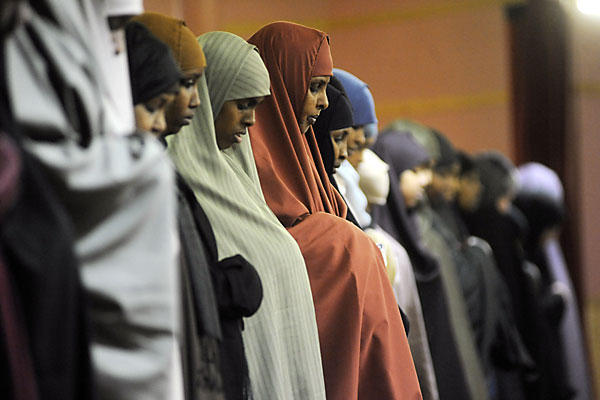 1. Education
The Messenger of Allah (p.b.u.h.) once said: "Acquiring knowledge is compulsory for every Muslim. (At-Tabarani)
This narration applies equally to men and women. "Knowledge" in this context refers primarily to knowledge of the Holy Quran and Sunnah as no Muslim should be ignorant of his or her Faith, but it also covers other areas of general education, which can contribute to the welfare of civilization. It is precisely the ignorance about their religion among Muslims that has led to men oppressing women because they believe it is permitted, women not demanding their God-given rights because they are ignorant of them, and children growing up to perpetuate their parents' follies. Throughout Islamic history, men and women both earned respect as scholars and teachers of the Faith. The books of Rijal (Reporters of Hadith) contain the names of many prominent women, beginning with Aishah and Hafsah.

2. Worship
Both men and women are the slaves of Allah and have a duty to worship and obey Him. Men and women have to pray, fast, give charity, go on pilgrimage, refrain from adultery, avoid the prohibited, enjoin the good and forbid the evil, and so on. Because of women's roles as mothers, a role which does not end at a specific time but is a round the-clock career, they have been exempted from attending the Mosque for the five daily prayers or for Jumuah (Friday) prayer. Nevertheless, if they wish to attend the Mosque, no one has the right to stop them.

3. Charitable Acts
Men and women are both encouraged to give charity, and there is nothing to stop a woman giving charity from her husband's income. Aishah reported that the Messenger of Allah said: "A woman will receive reward (from Allah) even when she gives charity from her husband's earnings. The husband and the treasurer (who keeps the money on the husband's behalf) will also be rewarded, without the reward of any of them decreasing." Asmaa once said to the Prophet "O Messenger of Allah, I have nothing except what Zubair (her husband) brings home." The Prophet told her: ‘O Asmaa give in charity. Don't lock it lest your subsistence is locked.’"

4. The Right to Own Wealth and Property
A woman has the right to keep her property or wealth, whether earned or inherited, and spend it as she may please.
This right was granted to Western women only very recently, and the women of India had to wait until 1956 for a right which Muslim women have always taken for granted. Concerning the right to one's earnings, the Holy Quran says:
"And wish not for the things in which Allah has made some of you excel the others. For men there is reward for what they have earned, (and likewise) for women there is reward for what they have earned, and ask Allah of His Bounty. Surely, Allah is Ever All-Knower of everything." (V. 4:32)

5. Freedom to Express One's Opinion
Few societies exist in which the ordinary citizen can confront the ruler face to face and challenge his policies. Even fewer societies allow women to be so bold, yet the Islamic ideal has always been open and accessible. This freedom of expression is aptly demonstrated by a famous incident involving Omar the second Rightly- Guided Caliph. Omar was once standing on the pulpit, severely reprimanding the people and ordering them not to set excessive amounts of dower at the time of marriage. A woman got up and shouted, "Omar, you have no right to intervene in a matter which Allah the All-Mighty has already decreed in Quran:
"But if you intend to replace a wife by another and you have given one of them a Qintar (of gold, i.e., a great amount as Mahr bridal money), take not the least bit of it back; would you take it wrongfully without a right and (with) a manifest sin?" (V.4:20)

After being reminded of this Verse, Omar withdrew his order, saying, "I am in the wrong and she is correct."

6. Participation in Jihad
The battlefield is a place, which frightens many men let alone women. Due to the aggressive and violent nature of war, only men have a duty to participate in Jihad (holy fighting in Allah's cause) while women are exempted. A woman once asked the Prophet to allow women to go on Jihad with men because of its excellence and the unlimited reward promised to Mujahideen (Muslim fighters) in the Hereafter. The Prophet replied: "For them is a Jihad without fighting," which referred to the Hajj and Umrah. Nevertheless the Prophet did permit women to nurse the injured and supply provisions to the Mujahideen at some battles. A woman from the tribe of Ghifar came with a large group of women to the Prophet when he was preparing to leave for the conquest of Khaibar. She said: "O Allah's Messenger, we wish to accompany you on this journey so that we may nurse the injured and help the Muslims." The Prophet responded, ‘Come may Allah shower His blessings upon you.’” Umm Atiyyah an Ansari woman once said:
"I have participated in seven battles with the Prophet. I used to guard the camels of the Mujahideen in their absence, cook the food, treat the injured and care for the sick."
Muadh Bin Jabal reports that his cousin Asmaa Bint Yazid killed nine Roman soldiers with a tent-pole during the battle of Yarmuk.

7. Freedom to Choose Her Husband
The guardian of the girl whether her father, brother or uncle plays an important role in her marriage such as finding a suitable match for her. But under no circumstance does this allow him to force his choice on her against her wishes. She is free to accept or reject his choice, or make her own choice. A woman named Khansa Bint Khidam once came to the Prophet and complained:
"My father has forced me to marry my cousin in order to raise his own status (in the eyes of the people)." The Prophet told her that she was free to dissolve this marriage and choose whomever she wished to marry. She replied, "I accept my father's choice, but my aim was to let the women know that fathers have no right to interfere in the marriage." (Ahmad, Nasa'i and Ibn Majah)

9. The Right to Custody of Children
Divorce is especially painful and difficult when the couple has had children, and awarding custody to either party involves difficulties. According to Western law, both father and mother have to prove to the Court that they are more capable of looking after the children, and this often involves maligning the other party in order to strengthen their own claims to custody. Islamic law has its own clear decision on this issue. Custody of young boys and girls goes to the mother. The son stays with his mother until he is about seven or nine years of age, after which he is looked after by the father. The daughter remains with her mother until she gets married. The exception is when the mother herself re-marries, in which case custody may be awarded to someone else such as the girl's grandmother or aunt. This is based on the Prophet's words to the divorcee:
"Your right to custody of the child is greater as long as you do not remarry."

10. Participation in Extending Co-operation for the Promotion of Good and Elimination of Evil.
The Holy Quran deals with this subject in clear terms:
"The believers, men and women, are Awliyaa (helpers, supporters, friends, protectors) of one another; they enjoin (on the people) Al-Ma'ruf (i.e. Islamic Monotheism and all that Islam orders one to do), and forbid (people) from Al-Munkar (i.e. polytheism and disbelief of all kinds, and all that Islam has forbidden); they perform As-Salat (Iqįmat-as-Salat), and give Zakat, and obey Allah and His Messenger. Allah will have His Mercy on them. Surely, Allah is All-Mighty, All-Wise." (V. 9:71)